This blog post is part of a series describing my ongoing analysis of the Kaggle Horses For Courses data set using Azure Data Lake Analytics with U-SQL and Azure Notebooks with F#. This is part 4.

In the first post I discussed how you could use Azure Data Lake Analytics and U-SQL to analyze and process the data. I used this mainly to generate new data files that can then be used for further analysis. In the second and third post I studied the effects of barrier and age on a horse's chances of winning a race.

In this post I'm going to study the relation between the last five starts that is known before a horse starts a race and its chances of winning the race. For every horse in a race we know the results of its previous five races from the runners.csv file in the Kaggle dataset. At first sight, this seems a promising heuristic for determining how a horse will perform in the current race so let's see if that's actually the case.

The analysis itself will again be performed using Azure Notebooks with an F# kernel. Here's the link to my notebook library.

What data are we working with?​

A typical last five starts might look like this: 3x0f2. So what does this mean? A short explanation:

So in 3x0f2 a particular horse finished third, was scratched, finished outside the top 9, failed to finish and finished second in its previous five races.

You may already spot a problem here. When we get a 1 to 9, we know what happened in a previous race. When we get a 0, we have some information but we don't know exactly what happened. For an f or an x we know nothing. In both cases, if the horse had run, it might have finished at any position.

To be able to compare the last five starts of two horses, we have to fix this. Especially, if we want to use this data as input to a machine learning algorithm, we should fix this1.

When we do some more digging in the dataset, it appears that we do not have a complete last five starts for every horse. For some horses, we only have the last four starts or the last two. And for some horses we have nothing at all. Let's take a look at the distribution of the length of last five starts in our dataset:

The accompanying Azure Notebook describes all fixes in detail, so I'll give a summary here:

Now that we can be sure that every last five starts has the same length, how do we compare them? The easiest way in my opinion is to take the average. So with our previous example we get:

With fixing and averaging in place, we will use switch back to U-SQL to prepare our dataset. Remember from the first post that we want pairs for all horses in a race so that we can reduce our ranking problem (in what order do all horses finish) to a binary classification problem (does horse a finish before or after horse b).

I'll digress a bit into Azure Data Lake and U-SQL so if you just want to know how last five starts relates to finishing position you can skip this part. I'm assuming you already know how to create tables with U-SQL so I'll skip to the part where I create the data file we will use for analysis.

First of all, we need the average finishing position over all races so we can fix x, f and missing data:

A little more complex but essentially the same as the previous query but with just the races that have more than 9 horses.

The final part is where we generate the data we need and output it to a CSV file:

There are two interesting parts in this query: the AverageLastFiveStarts function call and the CROSS JOIN. First the CROSS JOIN: both @avgPosition and @avgPositionAbove9 are tables with just one row. A cross join returns the cartesian product of the rowsets in a join so when we join with a rowset that has just one row, this row's data is simply appended to each row in the first rowset in the join.

The AverageLastFiveStarts user-defined function takes a last five starts string, fixes it in the way we described earlier and returns the average value:

The code is also up on Github so you can check the details there.

We now have a data file that has, on each row, the last five starts average for two horses and which of the two won in a particular race. Some example rows:

So how do we get a feeling for the relation between last five starts and the chances of beating another horse. I decided to do the following:

This is of course a contrived example. In reality we have almost 600000 rows so we will get some more reliable data. I experimented a little with bucket size and 41 turned out to be a good number. This resulted in the following plot. I skipped the outer three buckets on both sides because there aren't enough data points in there. 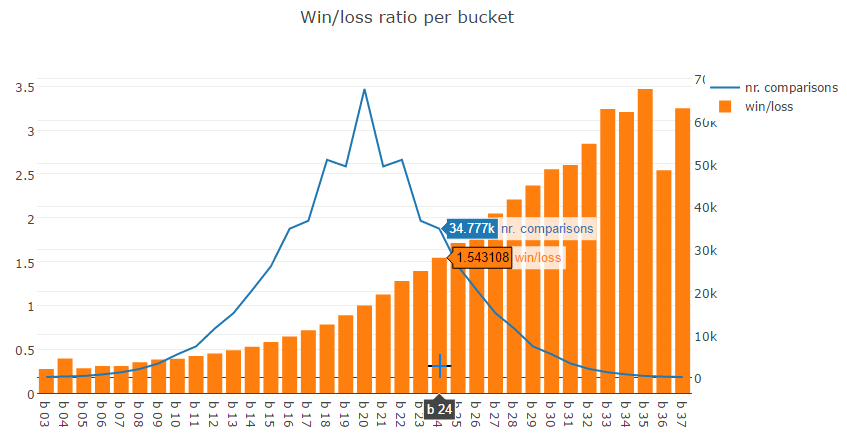 The bars represent the buckets, the line represents the number of data points in each bucket. I highlighted bucket 24 as an example. This bucket represents the differences between average last five starts of two horses between 1.59 and 2.05. This bucket has 34777 rows and the win/loss ratio is 1.54.

This means that if the difference between average last five starts of two horses is between 1.59 and 2.05, the horse with the higher average is 1.54 times more likely to beat the other horse! This is pretty significant. If we take two random horses in a race, look at what they did in their previous five races and they happen to fall into this bucket, we can predict that one horse is 1.54 times more likely to win.

We need to put these numbers a little bit into perspective, because it matters how many records of the total population fall into bucket 24. This is about 5.83%. However, the data set is symmetric in the sense that it includes two rows for each horse pair (so if we have a,b,True we also have b,a,False). So bucket 16 is the inverse of bucket 24 with the same number of records: 34777. This means we can actually tell for 11.66% of the total population that one horse is 1.54 times more likely to win than another horse.

So far, we have analyzed three features for their effect on horse race outcomes: barrier, age and last five starts. Barrier and age had a clear effect and now we found that average last five starts also has an effect. Each one of these separately cannot be used to predict horse races but maybe combined they present a better picture.

Age and barrier are independent of each other. The barrier you start from is the result of a random draw and it has no effect on the age of a horse. Vice versa, the age of a horse has no effect on the barrier draw. We already established that both age and barrier have an effect on race outcomes so you might be inclined to think that both also have an effect on the last five starts. This is not true for barrier but it may be true for age. We determined in the previous post that younger horses outperform older horses. It makes sense then that the last five starts of younger horses is better than that of older horses.

Ideally we would like to present a machine learning algorithm a set of independent variables. Using both age and last five starts may not be a good idea.

In the next post we'll get our hands dirty with Azure Machine Learning to see if we can get 'better than random results' when we present the features we analyzed to a machine learning algorithm. Stay tuned!